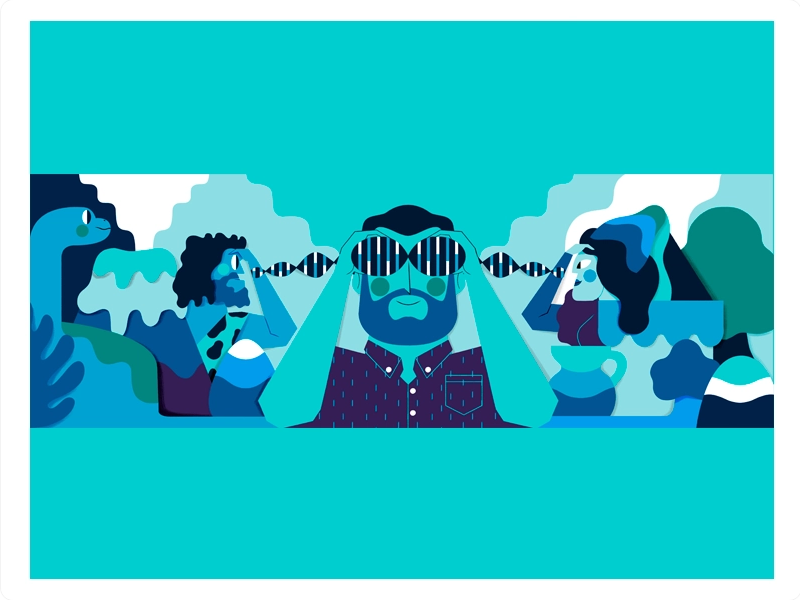 Decoding the human genome sequence is the most significant undertaking that we have mounted so far in an organised way in all of science. I believe that reading our blueprints, cataloguing our own instruction book, will be judged by history as more significant than even splitting the atom or going to the  moon.

The term genomics was coined with the launch of the eponymous peer-reviewed journal in 1987 and helped to distinguish the science from genetics, the study of inheritance that only considered one gene at a time.

Following this, the human genome project took place and its aim was to sequence the 3 billion positions in our genes.

It took scientists 10 years and nearly $3 billion to analyse every base pair for a single person, and it was not an easy thing to do!

Then, in the mid-2000s, new forms of faster DNA sequencing allowed for the detection of variants in individuals and populations, genotyping was born and it never stopped to become cheaper and more accurate over the years.

Nowadays, you can have your whole genome analysed for less than a $1,000 through a process called sequencing, sequencing looks at every single one of those 3 billion base pairs in your genome in a matter o weeks.

However sequencing your whole genome,  not only it is not necessarily in everyone's budget to spend that type of money on this kind of analysis, but the application that could be helpful to you based on your whole genome are not there yet.

At Omnos we have set the mission to democratise the science behind health, genetic analysis is a great comprenant of that mission as it unlock access to a personalised approach and this is why we offer genotyping analysis.

Instead of looking at all 3 billion base pairs, we look at around 700 000 positions called SNPs.

This give you a pretty good idea about what your genetics can tell you, if you compare to people who are totally unrelated, you'll find that there's genetic sequences are close to 99.9% identical positions with base pairs are known to vary are called SNPs.

We now  have identified around 10 million SNPs out of the possible leave billion base pairs, not all of these SNPs, however only 20 000 of them code for something, meaning they have a known function.

At Omnos we picked among those 700,000k of these SNPs the one that have well studied contributions to help.

This is why we choose genotyping as a way to offer a more significant data set to our users.

But First  let’s look closer at what is genotyping ?

Here is the Wikipedia definition :

Genotyping is the process of determining differences in the genetic make-up of an individual by examining the individual's DNA sequence using biological assays and comparing it to another individual's sequence or a reference sequence. It reveals the alleles an individual has inherited from their parents

Now that we understand a bit more about genotyping, here are a 3 reasons why we use it as part of our genes test to unlock the code of  over 700k of your genes.

We believe in Heath data ownership

Our gene test  currently report for over 350 SNPs covering over 500 reports across all areas of health and wellness.

However your raw gene data file is made accessible within your profile with the raw data of  your 700k genes!

As a side note here, make sure to have enough space on your computer before downloading that file!

Health data is one of the fastest growing commodity.

At Omnos we position ourselves strongly about data ownership.

Your genes , your data! We take security very seriously and work hard to make sure

you have complete control over your data.  This is why we ensure you can access the raw results, request all of your data or delete your account at any time.

And we will never sell or pass on your data to any other third parties. NEVER

You are in charge!

However in the future we might enable you to use your data asset as you wish and become the aggregator and secure platform that allows you to do so.

Wether, if you choose to do so by your own consent, and be rewarded for a better health insurance premium deal or for any other application that could benefit you, wether as a perk or even financially. This bing  only possible thanks to our commitment to the full access of your data at anytime.

One thing we know for sure is science in the field of genomic is rapidly progressing,  and new gene- lifestyle interaction are continuously being uncovered.

Wishin our scientific team, we process and validate those new discovery on a constant bases.

We have set internal validation processes to make sure all genes we report upon are largely validated and have subsequent references across different peer reviewed articles.

This gives us the ability to continuously update our users with new genes and the recommendations attached to them, and this always with the confidence of their strong scientific validation.

This is the reason why we make  the science available and clickable within each of your genes report, as well as the science backing up the suggested recommendations.

Genotyping as a process of sequencing genetic material is the only way for us to enable those ongoing updates of your genes.

As an example a new upcoming 56 genes reports is now being updated for our users about COVID19, immunity and viruses.

We are doing this continuously across all topic of your health and wellness to always offer you the most complete and accurate insight into your genetic data.

And other advantage here about genotyping for that matter is  our users will never have to re-test again for you to get access to those updates.

As all the necessary genetic material  we gather from your gene test will be  genotyped and securely stored on your behalf on our secure servers in the UK.

So with Omnos you will never have to do another DNA test as we have it all covered with our complete genes test.

The future is bright  for your genes

When there isn’t many application for now using all that data set a very few are yet accessible to everyone.

At Omnos we work hard to give you access to the one that will directly affect your wellbeing for the better.

From personalised supplementation strategy and recommendations to your personalised food list are some great example.

However it could also be used for over interesting application if you were to be opting in for them.

Advances in DNA technology bring up fascinating questions about what role it will play in our society, from personalised medicine to the food you eat.

Other application such as using DNA as a unique Identification for example.. even more accurate and secure than face detection are all possible Avenue.

The future will tell us how much of it can be used...

For now we are focused on democratising the science behind health , making it simple and accessible to anyone and effective to everyone,  thanks to our intelligent health system that enables optimisation through knowledge, planning and prevention, with the peace of mind that  all recommendation we make are based on validated science.